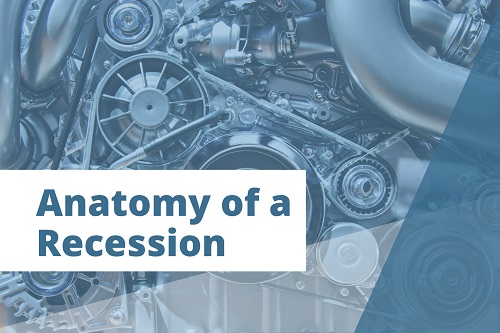 Anatomy of a Recession

U.S. GDP growth bounced back in the third quarter snapping that two-quarter contraction that caused a technical recession. The consumer remains robust and continues to spend despite inflation; in addition, government spending grew in the third quarter. However, rapidly rising rates have cooled the U.S. housing market substantially and private investment has cratered the last two quarters as homeownership continues to become more difficult.

All of this had led the media, investors, politicians, and workers alike to ask, “Is the U.S. in a recession?” The business cycle dating committee at the National Bureau of Economic Research is responsible for calling U.S. recessions and typically does so after the fact by examining a holistic view of economic data. At the large banks, most believe that the U.S. economy has between a 40% – 80% chance of dipping into a recession in the next twelve months, signaling there is no consensus even among the largest market participants. So, let’s take a look at some of the key economic indicators going into the end of the year.

Unemployment remains strong but saw a mild increase to 3.7% in October which could continue to trend upward as announcements of layoffs have cast a shadow over the tech sector and investment banks. Wall Street’s annual layoffs appear to have returned and large staff departures at tech companies like Meta and Twitter may weigh on upcoming employment figures. Inflation is still hot but moderated more than expected in October with CPI increasing 7.7% year-over-year and 0.4% quarter-over-quarter. While prices are still high, the news of layoffs coupled with softening inflation may provide cover for the Fed to slow rate increases at the December meeting. The market is now pricing in a 50 bps hike in December, compared to the 75 bps rate increase in November. Home prices saw their growth nearly halved in the third quarter with median prices increasing 8.6% versus 14.2% in the second quarter. Finally, U.S. industrial activity continues to expand as shown by the ISM manufacturing PMI which is barely in expansion territory at 50.2. Overall, the outlook for the U.S. economy is uncertain, and we expect the Fed to continue raising rates until we see a material decline in inflation. However, the pace of these increases is expected to slow, and the economy is likely to enter a recession from a place of relative strength should one come to pass.

Source: Bloomberg. Data unaudited. Information is obtained from third party sources that may or may not be verified. Many factors affect performance including changes in market conditions and interest rates and in response to other economic, political, or financial developments. All comments and discussions presented are purely based on opinion and assumptions, not fact. These assumptions may or may not be correct based on foreseen and unforeseen events. The information presented should not be used in making any investment decisions. This material is not a recommendation to buy, sell, implement, or change any securities or investment strategy, function, or process. Any financial and/or investment decision should be made only after considerable research, consideration, and involvement with an experienced professional engaged for the specific purpose. Past performance is not an indication of future performance. Any financial and/or investment decision may incur losses.