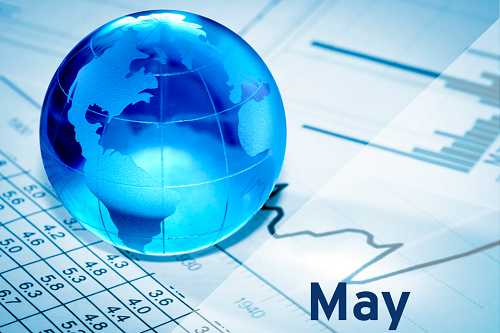 As confirmed cases of COVID-19 in the U.S. more than doubled during April from 600k to over 1.3 million, economic data covering the early stages of the “Great Shutdown” was released and proved to be as catastrophic as anticipated. To be sure, phrases such as “unprecedented” and “worst on record” have become all too common and will remain frustratingly unavoidable in economic commentary in the weeks and months ahead as the brunt of the pandemic’s economic costs are realized.

Reflecting the early impact of pandemic-related lockdowns, the advance estimate of first-quarter GDP showed the U.S. economy contracted at a -4.8% annualized pace, marking the end of the longest economic expansion in U.S. history and signaling the beginning of what will likely be the deepest U.S. recession since the Great Depression. According to a Bloomberg survey of 63 economists, the median forecast for second-quarter growth is an unsettling -27.5%.

Among the most startling economic data released in recent weeks is that from the labor markets. Mirroring the unprecedented increases in weekly claims for unemployment benefits, the Bureau of Labor Statistics reported that the U.S. economy lost a staggering 20.5 million jobs in April. For perspective, U.S. firms shed a total of 19 million jobs during the last seven recessions combined. The magnitude of April’s job losses pushed unemployment to 14.7%, far surpassing the previous post-WWII era high of 10.8% set in November of 1982.

Reflecting the global nature of the COVID-19 pandemic, oil prices turned briefly negative for the first time in history as the collapse in demand accentuated by the “sudden stop” in world economic activity collided with growing oversupply issues and strained storage capacities. While oil prices have since rebounded back into positive territory, the plunge below zero reinforces the initial deflationary impulse of COVID-19 that policymakers struggle to combat. Looking ahead, the economic and market outlook remains heavily tied to the evolution of the virus and the actual public response to re-opening efforts. These efforts must be balanced against the public health concerns related to the premature lifting of mandatory business closures, shelter-in-place orders, and other social distancing policies.